Walk Up and Pick Up Hours- Picnic tables are open and 6′ apart:) 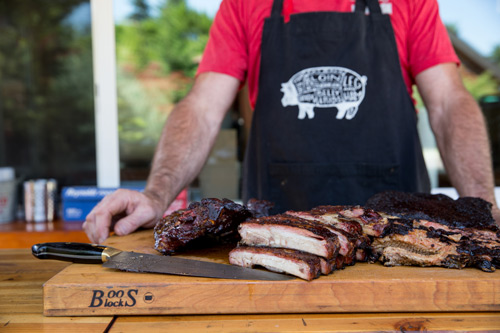 With our restaurant location in Lake Oswego, Oregon, Pine Shed Ribs is dedicated to providing our customers with fantastc barbecue.

Pit Master Matt Ramey has been churning out barbecue since his college days. Pressured to “go and find a real job” by his dad, Matt found himself serving up tri-tip sandwiches as fast as he could one summer at the State Fair. As he watched the line of customers stretch down the midway, he knew had been bitten by the restaurant bug.

He earned more pit master chops while working at his parents’ restaurant, cooking Santa Maria-style tri-tip sandwiches to hungry vacationers and playing mad scientist with barbecue sauce recipes. Even after his parents sold the restaurant, he hung on to his barbecue trailer and equipment, instinctively sensing that they may get used again one day.

In the summer of 2001, with one open pit barbecue and little else, he dusted off the smoker and launched his first stand at the Old Wizer’s Grocery in Lake Oswego. After several summer seasons that always seemed to stretch into November, he outgrew his corner of market and relocated to a little house-turned-restaurant on B Avenue in Lake Oswego called Logan’s Backyard Barbecue (named for his son).

Nearly 10 years later, after stumbling upon a quaint little shed off of Lower Boones Ferry Road in Lake Oswego, Matt expanded again, this time re-branding the business/restaurant “Pine Shed Ribs and Barbecue.” Today, Matt is still manning the smokers and serving lines of loyal customers  slicing up Santa Maria tri-tip, but also evolving services to include catering, a happy hour menu and an amazing lineup of rotating taps.

Thanks for stopping by. 🙂